Wearable Fitness Tech: Which One is for You?

If you don’t like the look of a typical fitness tracker, try Withings Activite. This fitness tracker stands out because it looks like a typical watch but has many of the same capabilities as most of the fitness trackers on the market. Bonus: You don’t have to charge it!

OK, so this one isn’t wearable tech but it does work with your Fitbit so we threw it in. The Aria smart scale by Fitbit detects body fat percentage, recognizes the user saving all your stats and syncs with your Fitbit device and app.     Editor's Note: After writing this article, I decided to go out and buy a Fitbit Charge. According to UPS, it's sitting on my doorstep as I'm posting this to the blog. Wish me luck! :) 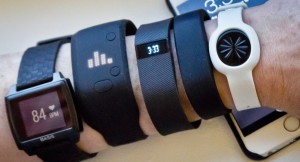